A report on visiting the local office of my congressman

Yesterday I went to the local office for my congressman. It was a scouting expedition. I had never been before and was curious to see how it was set up.

One of the interesting things I observed was a list of topics on a whiteboard. These were issues raised by people who dropped in during the week. Here is the list:

The surprising thing to me was there were only 22 tick marks total! In the last week only 22 people had dropped in to register their concern about various issues. And of the above twelve issues, six of them were raised by just one person.

If your congressman has a local office close to you, it may be worth a few minutes to drop by and register your concerns. You could easily be the only person to raise your particular issue that week.


If you happen to visit your congressman’s local office, please tell me how it goes.
Posted by Henry Cate at 2:10 PM 1 comment:

Call to Arms: Be a Minuteman Lobbyist

Minutemen contributed to the colonists’ victory in the American Revolution. These men were the early response team of the local militia. Minutemen were trained to react quickly. The success at Lexington and Concord was due in part to the rapid mobilization of minutemen, citizens who cared about their rights and opposed the dictatorial degrees of the king.

I recently came to the conclusion that I am a Minuteman Lobbyist.

I was introduced to politics at a young age. My father helped with several campaigns. He encouraged my political education by paying me a penny a word to write letters to our congressman and senators.

In my early adult life, I ran for California State Assembly, 23rd district, but lost in the primary by about a hundred votes. Over the next ten to fifteen years, I was involved in several local campaigns. Lately, I’ve wanted to be more involved in politics, but haven’t made the time to join a major campaign or crusade.

I realized that sometimes we make getting involved in politics more difficult than it is. One goal of this blog is to help people to take part and be effective, but in a manner that fits in our busy lives.

Last fall, I started calling my representatives. During my lunch hour I could reach out while walking from my cube to the cafeteria. A few weeks later, I started sending emails. It was simple to craft a short letter and send it to my congressman, my senators, the President and Vice President. Now, I take a few minutes to contact my representatives several times a week.


Why be a Minuteman Lobbyist

You may think that your voice will be a drop in the bucket. While Congress as a whole may get as many as 80 million emails a year, the average congressmen gets in the neighborhood of a thousand emails and voice messages from his constituents each week. The messages are scattered across dozens of topics. A few extra constituents who push for one side of a position can wake up a congressman.

Congressmen are worried about getting re-elected. The main reason professional lobbyists have any influence is because they’ll give money to congressmen, which helps them get re-elected.

You have the inside track. Your congressman really, really wants your vote. Tell him what he needs to do to get your vote.


How to be a Minuteman Lobbyist

You can get the web pages for your congressman and your senators. These are the contact web pages for the President and Vice-President. (If you want to focus on the state level, do a search using legislators or governor, and the name of your state
Posted by Henry Cate at 2:08 PM 12 comments:

Spread the word by using the Minuteman Lobbyist icons

You can help support this effort by adding the Minuteman Lobbist icons to your blog, web sites, and other places.

Here are the icons: 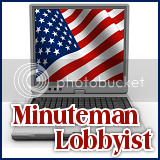 Here is the HTML:


You can just copy the above HTML into your blog template.


(These icons were created by Sisterlisa of The National League of Posterity.)

Sample emails to invite someone to be a Minuteman Lobbyist

Below are a few sample emails you might send to people to encourage them to each be a Minuteman Lobbyist. You are welcome to use these as templates.

If your browser works with your mail client, then you can speed up the process by clicking on the “Mail This!” links, and just add the email addresses of your friends and family. Otherwise, bring up your mail client, copy in a template from below, and change to suit your tastes.

Many of us receive hundreds of emails a day demanding our attention. This low keyed email might be more successful:

Subject: Ways to influence our politicians

Here is a strategy for a fast and easy way to influence your representatives:

It only takes a minute to make a difference.


A little more forceful – Mail This!

Depending on who you are inviting to join you, this might be OK:

Subject: Please read about being a Minuteman Lobbyist

This post has a simple technique to help us be more involved in politics. Please read it:

Then please pass on the message.

If you have a suggestion for another template, please leave a comment.

Reasons to be a Minuteman Lobbyist

Here are a few reasons to be a Minuteman Lobbyist:

1) Duty. As citizens of this country we should be involved.

2) Maybe make a big difference. Fairly often votes in Congress will be close. It is possible that a few people will push a couple key congressman one way to make the deciding votes.

3) Become better educated. By spending a little more time reading the news and writing about it, you’ll have a deeper understanding of what is going on in our country.

4) Have fun. Several times our congressman has called to follow up on our emails. My fifteen-year-old daughter was excited for days when a Congressman’s aid called and my daughter was able to explain part of the Constitution to the aide.

5) Have a creative outlet. Writing your representatives can be a forum for your creative juices.

6) Make it a social activity. You can get together with several friends and neighbors to coordinate your weekly emails.

7) Less guilt. By doing something positive you won’t feel guilty about not being involved.

8) Good example to your children. As you write and call your congressman, your children will see what you are doing and follow your example.

9) Education for your children. Include your children. Have them write or call. My older two daughters have been writing for a couple months now and they now read the front section of the paper so they can follow the issues.

10) Be useful. It is easy to be distracted by the myriad ways to be entertained today. The average American watches six and seven hours of TV a day. It is easy in our society merely go through life. Be a Minuteman Lobbyist and do something useful.

11) Small efforts add up. Ten minutes a day, five days a week, comes to more than forty hours a year.

12) You can’t ignore the government. The government is taking over more and more of our life. A hundred years ago the Federal government was a small fraction with a miniscule budget. Now we are subjected to 27,000 pages of laws, and the budget has grown to 3.5 trillion dollars.


If you have other reasons to be a Minuteman Lobbyists, please add a comment.

Ways to invite people to be a Minuteman Lobbyist

Ask your friends, ask family, ask your neighbors, ask anyone you think might be willing to take a few minutes at least once a week. Send them a link to the main post on being a Minuteman Lobbyist.

2) Use Reddit, Digg, Stumble It, Delicious and so on to spread the word.


Paul Revere helped spread the word to bring the Minutemen into action. You can provide a similar service to asking others to be a Minuteman Lobbyist.


If you can think of other ways to spread the word, please add a comment.

Suggestions on contacting your representatives

Be polite.
Be specific.
Be brief.

The following are a few ideas on how to make your exchange with politicians more effective. If you have some additional thoughts, please leave them as comments. I may update this post with suggestions I like.

1) Be polite: Calling politicians names or being offensive will not bring them around to your point of view.

2) Be short and to the point: A multi-page email will not be read. Congressman are receiving thousands of emails, voice messages, letters and FAXes each week. Some senators receive thousands a day. Their staff does not have time to read a novel.

3) Let them know you are watching them: Too often politicians will make sweeping promises, and rarely suffer any consequences. By reminding them of their promises they are more likely to follow through.

4) Tell them you are vocal: If you have a blog, mention that you wrote about this issue on your blog. If you wrote a letter to the editor, tell them. If they see you as one with more visibility and influence, they’ll place more importance on your message.

5) Get others to be involved: A friend once told me that a good man can do the work of ten, but a great man can get ten men to do their work. By inviting and encouraging others to join you in your crusade to make a difference, you will be much more effective.

6) Try to schedule a trip to their local office. You can meet the staff members, get their names, find out who is responsible for issues you care about and ask how they would like to be contacted.


Other places to get ideas on how to contact your representatives:
Electronic Frontier Foundation